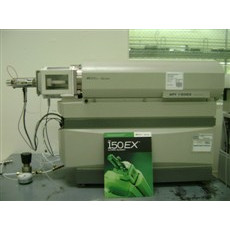 The API series includes models suited for a variety of research, clinical, or testing environments.  The line also has an interesting and legendary background.

LC-MS/MS System - 1989
Introduced in 1989, the API III was the first commercial dedicated LC-MS/MS system. Using the IonSpray source developed at Cornell University, it became the benchmark for LC/MS, and revolutionized the way the pharmaceutical industry conducted its R&D and quickly became the gold-standard in MS.

API 3000 LC-MS/MS System - 1998
Released in 1998, the API 3000 LC-MS/MS system raised the bar in terms of performance. The patented LINAC collision cell at the heart of this system was the first collision cell to monitor hundreds of compounds in a single analysis with no cross-talk, providing more sensitivity and accuracy for the next generation of research.

API 4000 LC-MS/MS - 2001
The API 4000 LC-MS/MS system is launched and quickly becomes the de facto standard in bioanalysis due to its high level of sensitivity, robustness and ease-of-use. The Turbo V source design is still the basis of SCIEX sources with versions of this widely adopted in the industry.

The API 5000 System - 2005
The API 5000 system is launched and is the most sensitive triple quadrupole ever made. It includes innovative QJet technology, the first RF quadrupole used for ion compression at high pressure.

Review the new and used product listings below provided by LabX.

The Applied Biosystems Sciex Single Quadrupole API 150EX is a LC/MS Liquid Chromatography Mass Spectrometer. Included with this model is the Analyst 1.4 and peaktrak 2.0 software with a PC. Picture shows Mass Spec with the Turbo Ion Spray source, source is not included..